We are delighted to welcome trumpeter Peter Medland who will be playing with us in our concert on Sunday 26th January. 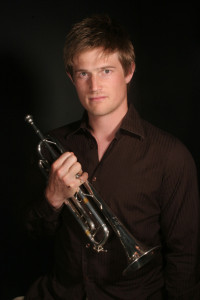 Peter started playing the cornet at the age of seven with a brass band in Swindon. Taking lessons at school, he soon switched to the trumpet and progressed through the U.K. Associated Board Exams, achieving grade 8 at the age of 12.

Six years with the Wiltshire Youth Orchestra alongside lessons with Gavin Wells at Cheltenham College helped his playing to develop. At 17 he had moved up to the 1st trumpet seat and he was awarded a Trinity College performance  diploma. He toured Italy as a soloist with the Salisbury Youth Orchestra, playing the Arutjunjan trumpet concerto.

Peter has since gained a First in Natural Sciences from Cambridge in 2002, and also a First in Music and Sound Recording from The University of Surrey in 2010, where he performed the Tomasi trumpet concerto for the first time in his final performance assessment. In between these degrees he worked in ski resorts, and learnt Spanish while surfing and working as a lifeguard in the Basque country. A perpetual student, he is now only six months away from completing a degree in medicine, following which he sees no other option than to get a proper job!

Studying medicine has required a great deal of commitment, but Peter still finds time for music and, as winner of the University Concerto Competition, he performed the Tomasi trumpet concerto with the University Orchestra. In his spare time Peter runs a website called www.sessionbrass.com through which he has recorded horn section sessions for producers of various genres around the world.

A great performance of Dawson : A Folk Symphony yesterday. We're not sure if any other UK orchestras have played it. Looks like @solsymphony are joining us soon. A great piece - unjustly neglected!!

It's Concert Day tomorrow. An afternoon of sumptuous 🇺🇸 music. Tickets on the door @PumpRoomChelt. 3pm. We'd love to see you there