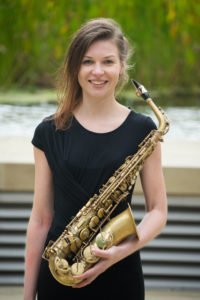 Rusne Mikiskaite is London based saxophonist who will be joining the Phil on Sunday 24th June, 2018 to play the Glazunov Concerto for Alto Saxophone and String Orchestra. She has appeared as a soloist and chamber musician in some of the most important concert halls in her native Lithuania as well as in the UK. Rusne’s performance in long-running Lithuanian festival “Recurrences” was described by the art portal “7art days” as “full of virtuoso lines, strong musical climaxes and entertaining extended technique sound effects”.

Rusne was a winner of the III prize in the International Jurjans Andrejs Woodwind Instrument Competition in 2016. Rusne also won a Concerto Competition at Royal College of Music in 2016. Recently Rusne performed with Laefer Quartet in the prestigious Three Palaces Festival in Malta, as well as at London music venues – St. John’s Smith Square, St. James’s Piccadilly and others. Rusne regularly performs with Duo Fantasia with the pianist Imma Setiadi. In December 2017 Rusne and Imma gave a lunchtime recital at the Bridgewater Hall, Manchester. In Summer 2017 Rusne was invited to teach and play at the international music festival and summer course Trakai Fanfare Week in Lithuania. She also played concerts at Cadogan Hall, King’s Place, Southbank Centre in London and will debut at Wigmore Hall together with Laefer Quartet in May 2018.

Rusne toured Estonia and Finland with the Quadruplex saxophone quartet in 2015 and performed many concerts in the Netherlands and Germany with the ArtEZ/HKU saxophone orchestra. She also performed in Lithuania and the Netherlands with Dutch pianist Thijn Vermeulen. Rusne gave a solo performance on Lithuanian National Television, her live recordings were streamed on Lithuanian National Radio. In 2011 Rusnė was a member of the European Saxophone Ensemble. She toured ten European Countries with the ensemble, performing together with other 11 saxophonists from different EU countries and the artistic director Cezarius Gadzina. Rusne is a prize winner of three National J. Pakalnis music competitions in Lithuania.

Rusne diverse programs range from original pieces for saxophone to transcriptions and arrangements, often written by her.  Compositions by composers G. Lago and Q. Jacobs were written for her and her chamber music groups.

Rusne finished her studies at Royal College of Music (Artist Diploma with Professor Kyle Horch) in 2016. She holds a Master in Music degree from HKU Utrecht Conservatoire, the Netherlands and her Bachelor degree is from the Lithuanian Academy of Music and Theatre. Rusne also studied at the Vilnius Tallat-Kelpsa Conservatoire and Trakai Music School, Lithuania. Rusne has had masterclasses with famous saxophonists Arno Bornkamp, Vincent David, members of the Habanera saxophone quartet, Marcus Weiss, Jan Schulte-Burnet, Johannes Thorell and Jonathan Helton.

**CONCERT DAY THIS SUNDAY **
Holst, Gipps and Elgar in the beautiful surroundings of @PumpRoomChelt. Tickets via @CheltenhamTH and on the door. We'd love to see you.