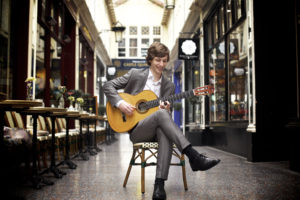 Chris Roberts is an innovative and exciting young guitarist whose performances have been praised for their ‘beautifully varied timbres, […] real virtuosity,’ and for being ‘simply mesmerising’. He will join the Phil in April next year to play Rodrigo’s famous Concierto da Aranjuez.

Chris graduated from Cardiff University in 2017 with first-class honours and the Neville John String Prize.

During his degree, he won the University concerto prize, and became the first soloist to perform with the Chamber Orchestra, under the baton of renowned conductor Andrea Quinn, for almost 10 years. He gained first place in the South Glamorgan Festival for Young Musicians ‘Young Adult Recital class’ and was additionally awarded The Diana Lock Memorial Rose Bowl for best overall performance and The George and Mary Mabbs Trophy for best guitar performance. Chris has recently been selected to perform as part of St David’s Hall’s International Concert Series: Young Artists Showcase. He is currently studying for a Masters in performance as a scholar at the Royal Birmingham Conservatoire under the tutelage of Mark Eden.

Chris is passionate about allowing as many people as possible to access music. For this reason, he founded, and is Chair of, the annual Cardiff Guitar Festival. Now in its third year, the charity runs outstanding concerts and summer schools, and raises funds to award course bursaries and free concert tickets to families in financial need. The festival has featured many internationally renowned performers such as Craig Ogden, Graham Anthony Devine, and the Eden Stell Guitar Duo. Chris also works regularly performing in care homes, Special Educational Needs and Disabilities schools, and in interactive concerts for babies and toddlers.

Chris loves connecting with with his audiences both in person and on social media so do follow him on Facebook at www.facebook.com/chrisrobertsmusic/ or visit chrisrobertsguitar.com

**CONCERT DAY THIS SUNDAY **
Holst, Gipps and Elgar in the beautiful surroundings of @PumpRoomChelt. Tickets via @CheltenhamTH and on the door. We'd love to see you.